Mansi tells Richard Hsu how her venture to law school was not her first choice, and that she had originally gone to college for software engineering with a heavy interest in tech.


“I graduated college in 2003, which was just after the first ‘.com’ bubble burst. I had a Microsoft internship in college, and was hoping to land my first job in tech but found that the jobs started slowly drying up. I did end up getting a job - which I was really proud of - but it was in missile defense and satellite systems. While it was really interesting, you never actually know who will be using your technology when you’re working for a defense contractor, which bothered me a little bit.”


She details that she was inspired to go into patent law at the advice of her Model UN teacher from school, whom she kept in touch with throughout the years.


“Then, I got into law school as my backup option. When my old Model UN teacher found out I had gone into engineering, she asked me if I had ever thought about going into patent law. After I did some research, I found out that I could marry both of my interests.”


Richard asks Mansi if she still has the underlying drive to be an entrepreneur or to one day start her own company. She says, “I think I’ll never say never to anything because the world happens and things change.”

Listen to the Full Episode 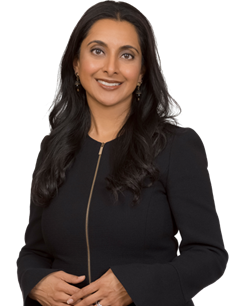