This content was originally published by IPWatchdog on Nov. 1, 2020.

“The initial impact of the COVID-19 pandemic on patent filings varied dramatically across industries. While filings in the computer areas were generally resilient, filings in the chemical and life science areas took a 20% hit.”

The worldwide COVID-19 pandemic has dampened many commercial operations in countries around the world, including the United States. Although the U.S. stock market underwent a historical pull-back and rebound in a matter of a few short months, new unemployment filings remained at record highs and corporate budgets were slashed to minimize expenses. In a large sense, corporate profits for the first half of 2020 were down for many companies compared to the end of 2019, though the technology sector was down less than others.

As companies scramble to reduce expenses, IP budgets may be on the chopping block. One approach for reducing IP expenditures is to cut prosecution costs by abandoning applications, and patent application abandonments indeed increased. Another approach for reducing expenditures is to file fewer patent applications (which may have initially offered added cost savings as USPTO fees rose in Oct. 2020 – with some fees increased by 25%-200%). Some predicted that new patent application filings would drop significantly, possibly as high as a year-over-year decline of 20% vs. 2019.

Thus, we requested data from the USPTO to determine whether and/or to what extent patent filings slowed during the initial months of the pandemic. The data was parsed by filing month and year and technology area.

Figure 1 shows the total utility patent application filings. Indeed, utility patent application filings dropped from 81,314 in Q4 of 2019 to 74,700 in Q2 of 2020 (8% drop). This decrease was small compared to the changes occurring in early 2013 (during which changes introduced by the American Invents Act went into effect), but greater than the Q4 to Q2 decrease seen 1 year earlier (3.6% drop) and 2 years earlier (3.5% drop). 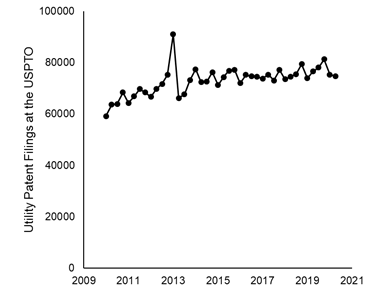 Investigating the extent to which filings changed in particular technology centers has a complication in that it can take months for an application to be assigned to an art unit. Thus, for each quarter, we scaled the technology-area-specific filing counts based on the ratio of applications that were identified as being unassigned relative to the total filings. Figure 2 shows the estimated filings for each Technology Center (separating Technology Center 3600 into business-method art units and the other art units). 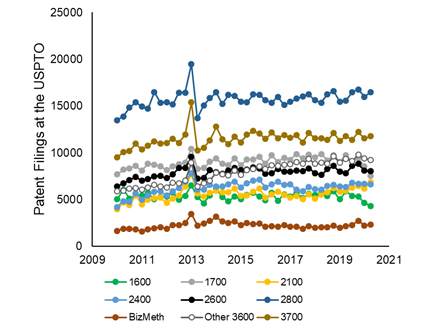 Table 1 shows the ratio of filings in the second quarter of 2020 relative to the filings in the fourth quarter of 2019, providing a comparison with pre-pandemic filings. Even though the Q2 2020 total filings dropped by about 8% compared to Q4 2019, the Q2 2020 filings in the computer-related technology centers 2100 (Computer Architecture Software and Information Security) and 2400 (Computer Networks, Multiplex, Cable and Cryptography/Security) were higher or essentially the same as those from Q4 2019. (Filings in Technology Centers 2800 – relating to Semiconductors, Electrical and Optical Systems and Components – and 3700 – relating to Mechanical Engineering, Manufacturing and Products – are also highly similar across the two time periods). Meanwhile, a marked drop in filings was observed in the biological and chemical areas (technology centers 1600 and 1700).

What Does it Mean?

There may be a variety of reasons why patent application filings are down in some technology centers and up in others, in a relative sense. One hypothesis relates to the ability of inventors in different technology areas to continue working to support patent application filings during the early part of the COVID-19 pandemic. As the pandemic progressed during February through June, many in-person operations were shut down, at least temporarily. Workers who could do so, transitioned to work-from-home, but some fields may have better supported this than others.

For example, work in the biological and chemical areas may be less suited to work from home as efficiently as computer-related technology work. In many cases, biological and chemical operations require laboratories and complex equipment or processes that can only be performed in-person. Computer-related technology work, on the other hand, may be more adaptable to be performed remotely, as a computer workstation or terminal and network access can be sufficient for many workers in this field to continue operations. However, Business Methods areas have also seen a significant drop in patent application filings, despite potentially being well-suited for remote-work operations, so it is unlikely that the ability to transition to remote-work is the only factor contributing to filing differences across technology centers.

It is still too early to fully understand the impact of COVID-19 on the economy and on patent filings. However, the above data may indicate that patent filings and discoveries were perhaps more resilient than had been expected. Many companies rapidly transitioned from in-person collaboration, hands-on equipment operation/experiments, and state-of-the-art computer networks to remote work. While some of the reported patent filings are likely a result of efforts that extend to pre-COVID times, the authors suspect that the data indicates that discoveries and innovation-protection efforts remain strong in the United States even despite the drastic societal and business impacts of the pandemic.

Protecting Antibody Innovations: Searching for Equivalents under The Doctrine of Equivalents —A Discussion of Teva v. Eli Lilly and beyond

Knowledge assets are defined in the study as confidential information critical to the development, performance and marketing of a company’s core business, other than personal information that would trigger notice requirements under law. For example,
The new study shows dramatic increases in threats and awareness of threats to these “crown jewels,” as well as dramatic improvements in addressing those threats by the highest performing organizations. Awareness of the risk to knowledge assets increased as more respondents acknowledged that their